Of all the great public health achievements over the past 100 years, controlling infectious disease ranks among the top 10, thanks in large part to the discovery of antibiotics. These miracle drugs, that we’ve grown to take for granted, have saved countless lives from previously deadly bacterial infections. (1)

However, the misuse and overuse of these drugs, especially in industrial agriculture, have brought us to a dangerous point in history. Today, many of the bacteria that had been vulnerable to our antibiotic arsenal have developed resistance to the drugs designed to kill them. (2)

How did we get in trouble?

Bacteria naturally mutate to develop resistance to antibiotics when they are exposed to doses that are too small to kill them. (3) That’s why doctors tell us to take the full dose of our antibiotic medication – to prevent the bacteria that’s making us sick from developing resistance to the drug.

On industrial farms, where livestock live in crowded, stressful and often unsanitary conditions, animals are given low doses of antibiotics to both prevent illness and to promote “feed efficiency” or weight gain. In fact, 80 percent of all antibiotics are not given to humans, but to farm animals. (4,5)

When antibiotic-resistant superbugs develop on the farm, they can pass to and from animals, farmers and vets, to food handlers, hospitals and the wider community. Plus, antibiotic-resistant bacteria and resistance genes can spread to soil and waterways from manure (5.6.7).

David Wallinga, M.D., Senior Advisor in Science, Food and Health at the Institute for Agriculture and Trade Policy, and member of Keep Antibiotics Working, warns that antibiotic-resistant infections “can kill quickly and with little warning.” (8)

Take the story of Russ Kremer. You may remember him from the movie, Fresh. (9)

Kremer grew up in a small town in rural Missouri where his father raised hogs “the old fashioned way” – on pasture. When Russ went off to college, he learned the “right” way to raise hogs – with an intensive, industrial model, to improve his “bottom line.”

So when Kremer graduated and returned home, he “modernized” his family farm, feeding low-dose antibiotics to healthy hogs, and injecting antibiotics into his sick animals. But one day, a boar nicked Kremer’s knee cap and an infection quickly set in – an antibiotic resistant infection that almost took Kremer’s life.

Kremer farms today, happily and profitably, with a pasture-based system where his hogs “don’t get sick.” (9)

Economics 101: Winners, losers, and the law

Like Kremer, many farmers have been convinced that they need antibiotics to produce affordable meat and remain economically viable. (10, 11) However Kremer discovered that as consumers become more savvy, they demand antibiotic-free meat, and they’re willing to pay more for it. (12)

It’s hard for us to imagine a “post-antibiotic era,” where once easily-cured bacterial infections no longer respond to previously powerful antibiotics. But today, Wallinga says antibiotic-resistant infections cost our nation at least $20 billion and steal tens of thousands of lives each year. (8)

For example, antibiotic-resistant diseases, such as MRSA (methicillin-resistant Staphylococcus aureus) kill more Americans than HIV/AIDS. (4) And the antibiotic resistant bacteria responsible for hard-to-treat urinary tract infections (UTIs), was recently traced to antibiotic-resistant E. coli bacteria in chickens. UTIs, most every woman’s nightmare, cost about one billion per year, and the incidence of resistant UTIs is growing. (13)

What’s worse, the pharmaceutical industry is not developing new antibiotics because it’s not profitable for them to do so. But for life-threatening bacterial infections, we have no alternatives to antibiotics. (2,14,15).

While the FDA recognizes that phasing out production uses of antibiotics as quickly as possible is a “public health priority “(16), our policy makers face powerful pharmaceutical industry lobbies who profit from the sale of these drugs. (11)

Further, attempts to eliminate the use of antibiotics in healthy livestock have been met with consumer warnings that the price of meat will rise.

Don’t believe it, though. Studies over the last decade show that raising meat and poultry without antibiotics could be accomplished at minimal cost to the consumer—about 5 cents extra per pound for pork and less than a penny per pound extra for chicken. (17)

Unless we take political action to ban the routine use of antibiotics in healthy animals, we can expect to see more illness and loss of life.

Representative Louise Slaughter (D-NY) understands. The only microbiologist in Congress, Slaughter re-introduced H.R. 965, the Preservation of Antibiotics for Medical Treatment Act (PAMTA). The bill would end the routine use of antibiotics on healthy animals and thereby curb the growing threat of superbugs. (4)

Organic Farmers Protect our Families and the Earth

The USDA Organic seal is a stamp of safety and protection for consumers. We don’t have to wonder how an animal was raised, or what it was fed. Antibiotics are strictly prohibited from organic agriculture.

Take this dietitian’s advice: Buy organic meat, poultry and dairy products. You’ll be protecting your family’s health today and generations that follow. And while you’re out and about, thank your organic farmer, too. They’re the real heroes in our food system. Doctors may treat illness, but organic farmers prevent it. 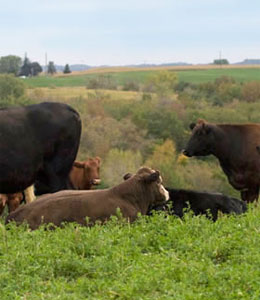 By not using antibiotics as feed additives, organic farmers protect our families and the earth.

* Each year, nearly 30 million pounds of antibiotics are used in livestock and poultry in the U.S. — four times the amount prescribed for treating infections in people. (18)

* 90 percent of animal antibiotics are sold with no prescription. They’re not used as drugs, but as “feed additives” to promote faster growth. (18)

* Meat labeled as “raised without antibiotics” can carry anti-biotic resistant bacteria -- likely due to contamination at conventional processing facilities. Only organic meats must be processed separate from conventional, which gives consumers greater protection. (20)

Consumers Union, publishers of Consumer Reports magazine, tested about 200 samples of pork chops and ground pork from meat cases in six cities around the U.S. They found almost 70 percent of the samples tested positive for “Yersinia enterocolitica,” a bacteria that can cause fever, diarrhea and abdominal pain, and is more likely to infect children. The majority of yersinia samples were resistant to one or more antibiotics. The study appears in the January 2013 issue of Consumer Reports magazine.

Visit these sites for more information:

Sign up today and receive special offers, recipes and news about our cooperative.

We take pride in raising the highest quality meats for you and your family. Subscribe to get exclusive savings.